Ad: Buy Girls Und Panzer Merch from Play Asia!
In this latest prequel watch I will be reviewing one of the most anticipated series of the autumn 2021 season 86. Whilst the series was not a stunner by any stretch of the imagination it does hold enough potential that if its weaknesses are addressed then this could be really strong series. Part 2 is still not done but from what I have seen thus far (seven episodes) it is a noticeable improvement as many of the issues I had with this season are addressed there making this a more worthwhile watch seeing as there is good stuff to follow from here. 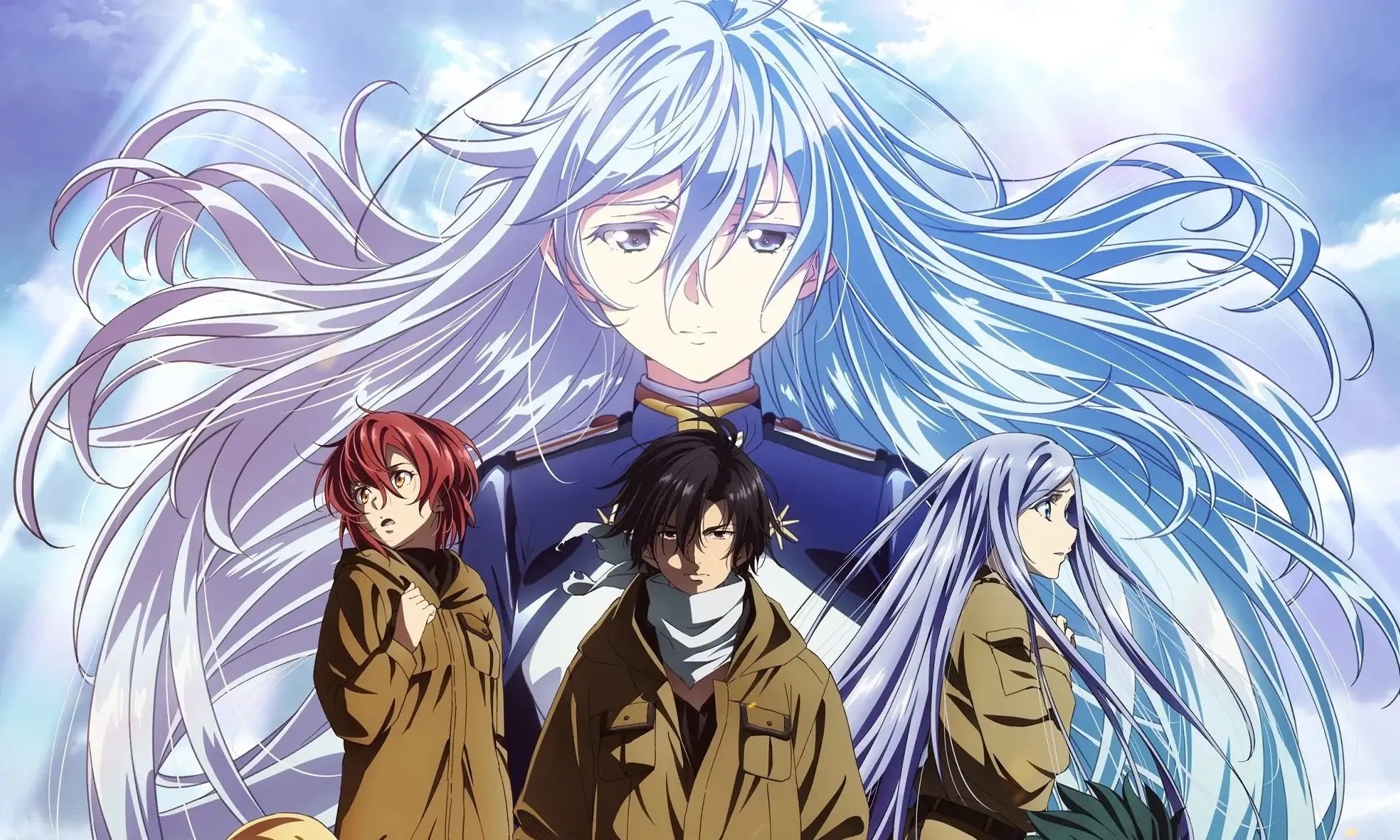 Eighty-Six is a military/mecha anime with sci-fi and political elements. The first season of Eighty-Six came out in the spring 2021 while the latest cour is currently airing in autumn 2021. The story behind Eighty-Six is certain to draw some attention as it tells the tale of the Republic of San Magonlia taking on the Giadian Empire’s automated Legion units with a seemingly perfect operational record winning all their battles whilst sustaining zero casualties. This apparent domination from the Republic hides a terrible truth as the Magonlian “automated” units are actually operated by human soldiers who die regularly in battle. 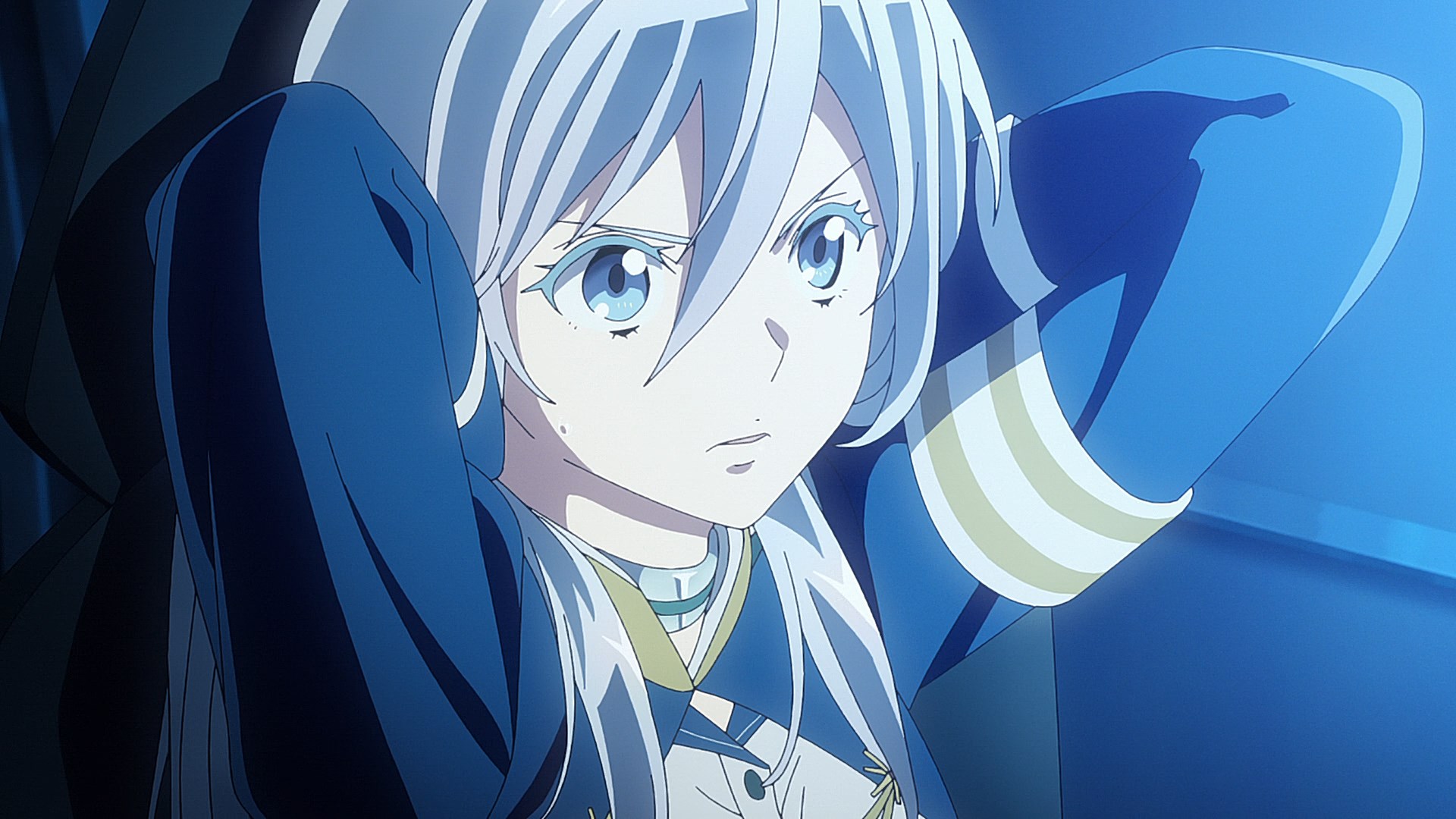 Eighty-Six is a premise with a difference and the story immediately brings the concepts of social inequality and systemic racism into the forefront as we are quickly introduced to a society where the people of least social standing are thrown into the frontlines. It is here that they are not only made to die in numerous often suicidal missions but even in death they are not acknowledged as humans. This harsh and brutish life lies in stark contrast to the Alba; the social elite who largely live a life of comfort, ignorance that is devoid of danger.

There is certainly a lot to chew and unpack in the opening episode as Eighty-Six does a really good job reeling you in with all these interesting plot developments. It certainly left me asking plenty of questions. However, what comes next is rather surprising as the next segment largely expands on these plot points through the lens of our two main protagonists Vladilena Milizé; an Alba handler and the Shinei Nouzen; a human pilot. Their contrasting personalities and worldview act as microcosm of the differences between the social elite Alba and the outcasts labelled the 86.

This character examination is actually executed well as we bear witness to numerous scenes that are seen from the point of view of each character in quick succession. These contrasting views allows us to see many scenes from each character’s own perspective and these differences act as a means of highlighting how different the Alba and 86 think. These differing views then act as a source of drama and social tension between Vladilena (often called Lena) and Shinei and his crew of 86. 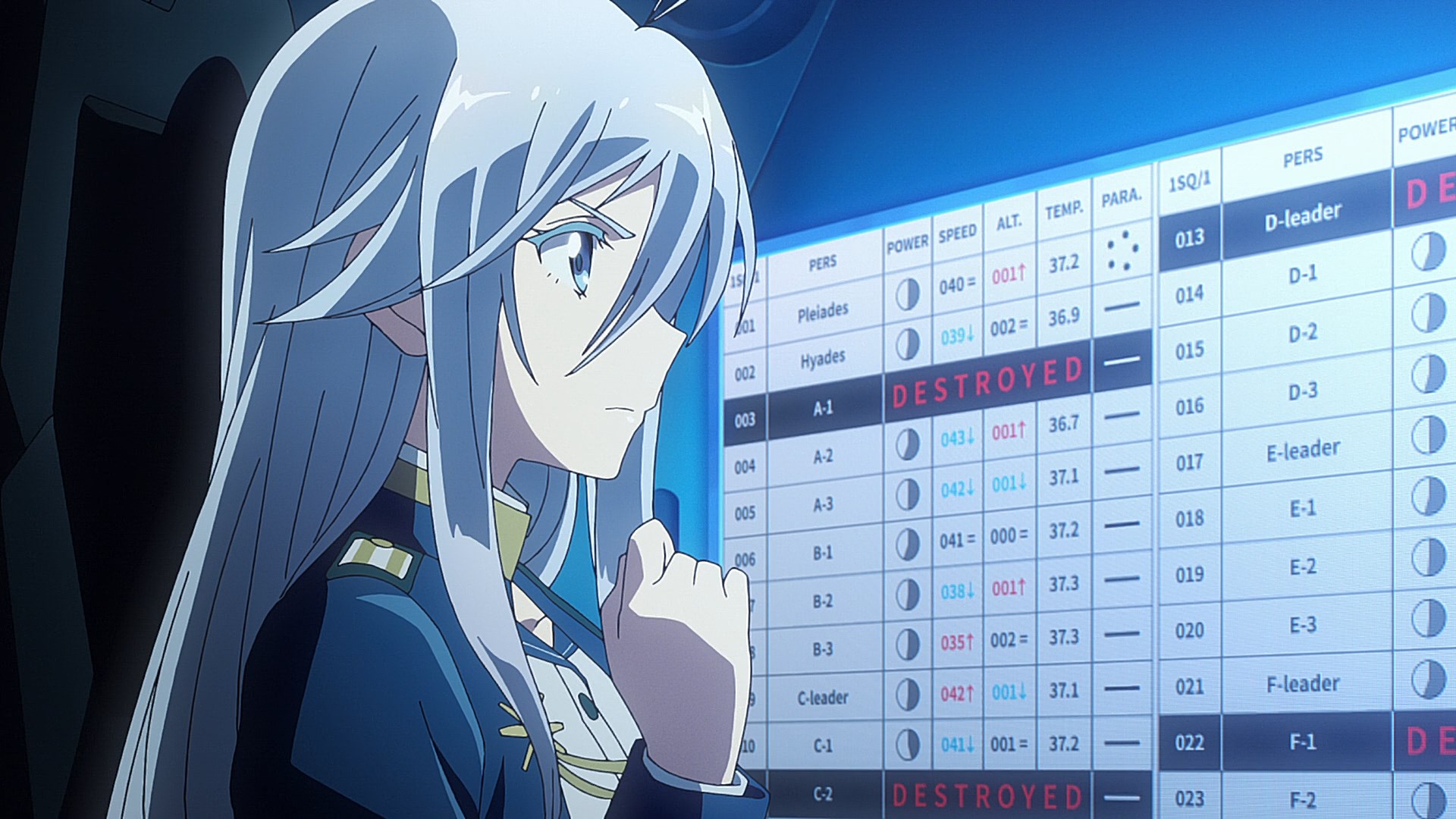 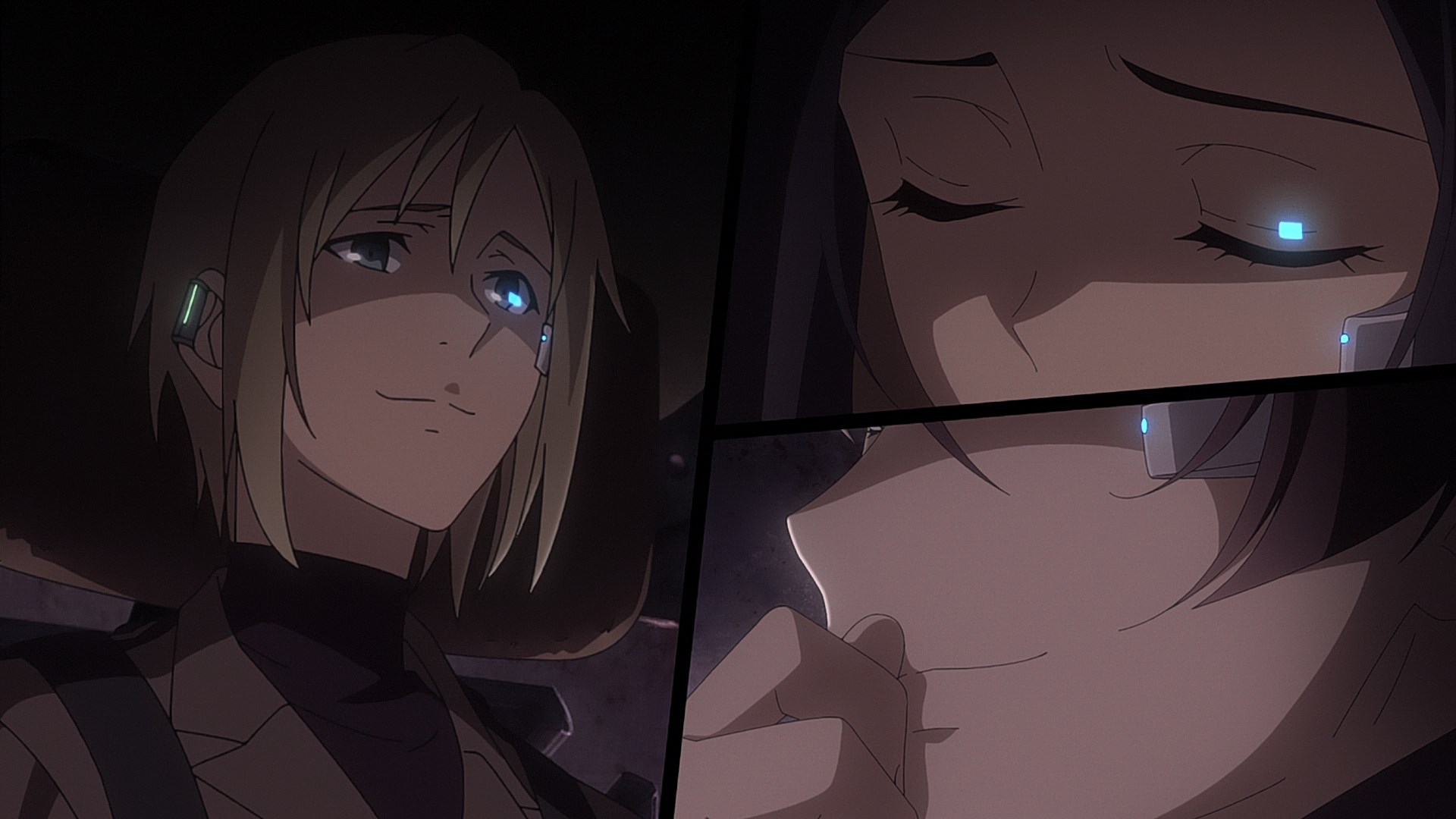 This method of character development is also utilised in adding character depth as while Lena and Shinei can come off as rather simplistic at the beginning, as we learn more about their backgrounds we see there is a nuance to them that keeps us engaged. What is more, in the case of Lena we also learn of her more redeeming and endearing characteristics that make her a more likeable character. What I should note here is there is a significant amount of development in the characters relationship that can be tumultuous but also have its heart-warming moments. I can see some drama lovers liking this aspect of 86.

As entertaining as this character building is however it cannot carry the show. This is especially true for a series like Eighty-Six that introduced a big can of worms with its ambitious premise. With a backstory like that there comes a point when the show is practically begging for a major plot development or twist (which is even hinted at in the show itself). This lack of story progression was a definite bugbear for me as there was definitely a point when I wanted the show kick on with the plot and mix up the prevailing narrative dynamic.

This was a definite weak point for me as whilst we did learn a good deal about our protagonists there is a limit on what we can know before things become old hat. It was this seeming lack of story and character development towards the seasons end that gave Eighty-Six a sense that it was dragging its feet and it made it harder to maintain interest towards the end. Fortunately, with a second season currently airing and all the hints thrown about the whole world turning upside down one can remain hopeful that things will really kick off in a big way in season two.

Animation is one of the strong suits for Eighty-Six as the series maintains a high standard throughout the show. Character designs are appealing especially for Lena and her various expressions. We also get numerous gorgeous scenic shots in the anime and whilst there are CGI shots in numerous battles these have been generating in a convincing and seamless manner never detracting from the action scenes. This great animation both traditional and in CGI is also supported by a great soundtrack that really adds to the mood of the scenes. Both the opening and ending themes are memorable and I particularly liked the opening song "3-pun 29-byou" by hitorie. Eighty-Six has three ending themes which are "Avid" by SawanoHiroyuki[nZk]:mizuki (episodes 2-3, 5, 7, 10, 11) and "Hands Up to the Sky" by SawanoHiroyuki[nZk]:Laco (episodes 4,6,8). The other ending is actually the opening song that is used for the season opener.

Eighty-Six starts with ambitious premise that will attract the eyes of many anime viewers. The show does raise and develop some interesting ideas that come from this largely dystopian backdrop but the primary issue that prevents Eighty-Six from becoming a true classic is the fact it does not develop on the macro topics in sufficient detail. For example, while I could understand some of the reasons why the Alba elite acted the way they did there was some fundamental issues I had with how the 86 behaved. To me there was aspects of their behaviour that did not make sense given what we know of their circumstances.

This lack of adequate explanation coupled by the fact we did not get enough worldbuilding elements meant that the story lacked sufficient depth to be truly ground breaking. If we learnt more about the world history this would have helped in understanding why the social hierarchy developed the way it did. This plus the conflict between the two armies was not covered in enough depth. That was the main weaknesses in the story however if these points are addressed in season two this could seriously elevate my opinion of Eighty-Six.

On the more positive side the animation and musical score for Eighty-Six was excellent making this an enjoyable viewing and listening experience. If you are a mecha/action fan then the fact it has got such good production values could be reason enough to watch this.

As for the characters themselves, they add an interesting twist to the overall series score. Whilst Eighty-Six is billed primarily as a military/mecha series the character dynamics found often added a sense of drama and later on even romance. Because of this I could see some fans of drama getting a kick out of this. If you stick for long enough you will even some romantic moments brewing so that could be a point of interest too. Whether this drama/romance holds in the second cour is another question but what I can say is that I would recommend Eight-Six for mecha fans. As for other anime fans I believe it may be best to hold fire until the second season is done as we could get significant developments that make season one a worthwhile ride.

Story 6 – A great premise that is unfortunately not fully explored. If we got a better insight into why the Republic fought the Gidian empire this would have been good. More than that though it would have been nice if we got more on why the 86 became social outcasts. This was the primary weakness but there was also pacing issues with Eighty-Six. On the more positive side the use of different first-person character perspective did a good job in providing a basic understanding into the fundamental social conflict between the Alba and 86 social groups.

Characters 7 – Lena and Shinei got the most character development out of the entire cast. Their developments were not only entertaining but kept us engaged in watching the show. The chemistry provided by the pair also acted to drive the story along as we got to understand the social dynamic of the world through their eyes. Saying that other characters also got significant developments and again their viewpoint added depth to overall story narrative. A potential issue in terms of characters could come from Lena herself as she her self-righteous behaviour coupled with her often extreme naivety could be a point of irritation for some viewers.

Animation/music 8.5 – Animation remained consistently strong throughout the eleven episodes and the use of CGI was also great and it was notable for how it was seamlessly added to the more traditional animated content. These great visuals were also supported by a great musical soundtrack that added to the mood of the series. These visuals are good enough to make this show worth it on its own.

Overall 6.5 – Great premise which is built up in an interesting manner by exploring the world through the contrasting viewpoints of the two main characters. This method of narrative direction served a dual purpose of plot and character building. The big issue however is there came a point when this means of storytelling got exhausted so the plot/character development largely ground to a halt by the series end.

Fortunately for Eighty-Six enough was hinted that we can expect some major turmoil come the second season so there is hope of grander things to come. Judging purely on the basis of season one though I would only confidently recommend this to fans of mecha/military anime. For anyone else this could be still be a worthwhile watch provided season two addresses at least some of the key weaknesses highlighted in this anime.
Click to expand...